As the g&g team has grown so much this year, with 3 new members (Alison, Rosie and Hannah F), we decided to was time again to get together and review our favourite patterns and fabrics from the shop!

The whole team love sewing their own clothes as even though there is always chatter in the shop about what everyone is sewing, every so often we have a more formal meeting where we each review a pattern so we can each learn more about what the patterns are like and get an idea of how they look like made up on different bodies as that makes such a difference! 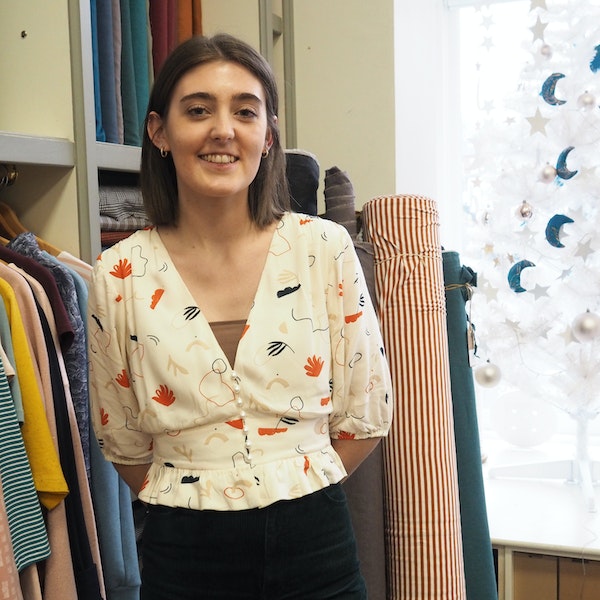 Hannahs lovely version of this pattern really brings the details of it to life! She used this Atelier Brunette viscose and lined it with our cream viscose fabric, which pairs perfectly!
She made a size 36 and found it was true to size but does come up snug at the waist so suggests you may want to make the lining first to check the fit.
She used forming tape interfacing around the neckline on the main fabric and lining to prevent it from stretching out there and did French seams on the inside for a delicate finish - well worth the effort!
She said she found it does come quite low so you might want to wear a vest underneath and it does come up fairly cropped you could could consider lengthening the gathered section if you wanted to.

Helens version of the Nina Lee Camden Pinafore looks so lovely and wintery made up in this needle cord. She cut a size 12, graded to a 14 at the hips, but then found she didn't need to and took it back in anyway, along with making it more fitted by having a bigger seam allowance at the centre back seam where the invisible zip is.

The garment is fully lined and she choose the luxurious cupro lining for her version and found it slippery to work with but it does make a difference when wearing the garment with tights or leggings. She did add in under-stitching where she could around where the lining and main fabric join to help keep it sitting on the inside.

The pattern is aimed at confident beginners but Helen felt intermediate might be more suitable due to the way it is constructed and how the notches came together over the princess seams as a lot of easing was required! 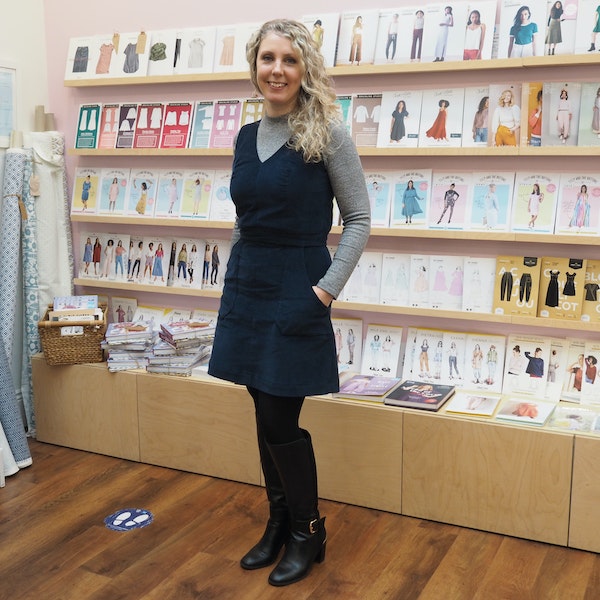 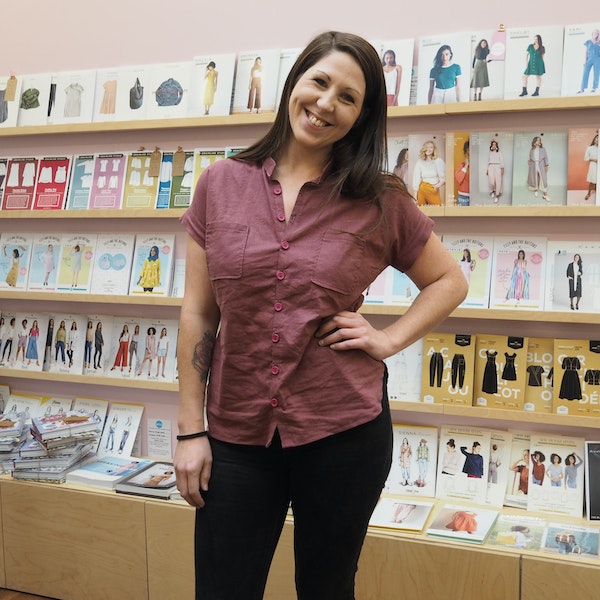 Hannahs version of the classic Deer and Doe Melilot Blouse looks great in this sorona linen - she said it's super comfy to wear and was really easy to work with and press as well.

This was her first shirt project and she found the cuffs a bit tricky so needed some extra help from Helen.

Hannah added in French Seams as well, which has given just as lovely a finish on the inside as well as out!

I love Alisons version of the Named Reeta dress in this drapey viscose print with a metallic dobby thread woven through it. She did find that when the right side of the fabric touches the skin it is a bit itchy so suggests sewing the inside back yoke so the back of the fabric is facing your body, or you can quite satisfyingly tweeze them out with tweezers!

She made a size 14 and found that it had lots of ease so to look at finished garment measurements when choosing a size.

The pattern is aimed at intermediate level and Alison suggests that it's probably best if you have sewn a collar before trying this pattern out as the collar pattern piece was hard to trace and cut out as the lines merged a lot. The instructions were ok but she found the hem and facing a bit strange and made up her own way around finishing it off.

She added 3 extra buttons on top of the 10 recommended as the ones she picked were a bit smaller and she found that the fabric requirements given in the pattern were spot on! 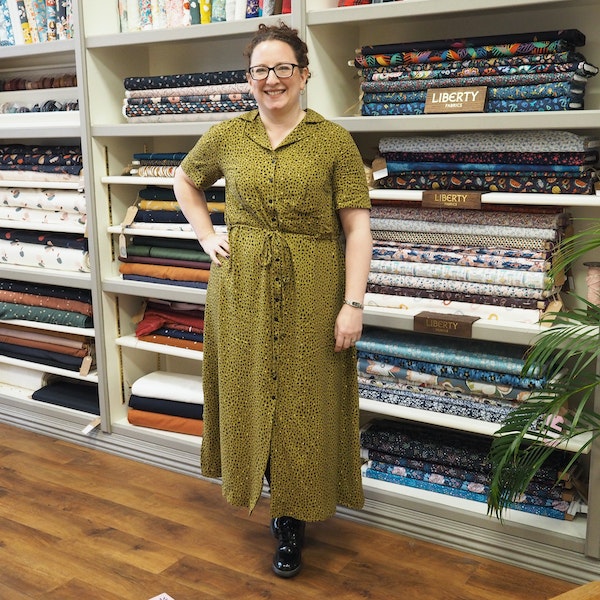 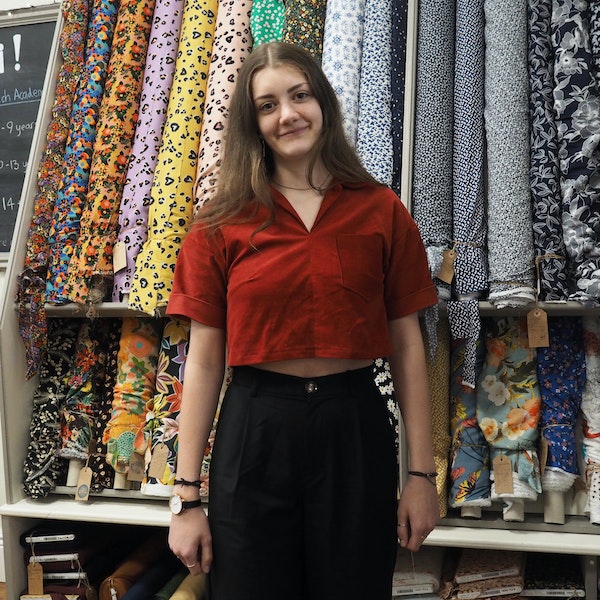 Rosie made a lovely snuggly version of the Merchant and Mills Factory top in the gorgeous amber stretch needle cord. She made it into a top by cutting off the skirt section of the pattern.

She sizes down and made a 10 as the finished garment measurements had a lot of ease.

She found that the armholes and facing were tricky to sew in as they wouldn't sit flat and if she made it again in a similar fabric she wouldn't put interfacing everywhere that the instructions recommends as the fabric is already on the thicker side.

I love the alternating direction of the cord on the pocket - such a nice detail!

I made a swishy version of the Tilly and the Buttons Indigo dress using this lush seed viscose print from Atelier Brunette.

I made a size 3 and I feel it does fit true to size but bear in mind the style of the garment is that it is very loose around the waist and hips so I added in a little tie belt to give some waist shaping.

I also used bias binding around the neckline rather than the facing, but in hindsight I should have made the neckline opening a little bigger before doing this. It is a bit tight getting over my head and as the seam allowance when sewing the facing on is 1.5cm, but when sewing bias on its only around 0.5cm its made the whole neck opening smaller. This is super easy to do by just trimming it back all the way around by 0.5cm-1cm before putting the bias binding on. 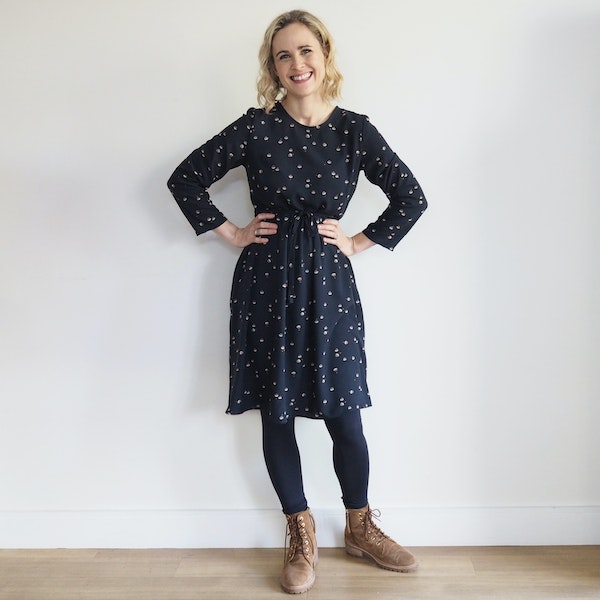 Jos version fo the Portabello trousers look fab in this moss stretch twill weave wool fabric! She made a size 16 at the waist, graded to a 14 at the hips and found them true to size. She redrafted the pockets to have slash opening front pockets rather than inseam pockets so it would reduce bulk around the hips and she also took 3cm off the back rise.

She used a 1.5cm hem and finds that normally she has to shorten trouser patterns more so suggests if you are making a full length version to check the inseam measurement and consider lengthening before cutting out.

She found the fabric requirements spot on, or even slightly tight so if you did want to length to buy a bit extra! 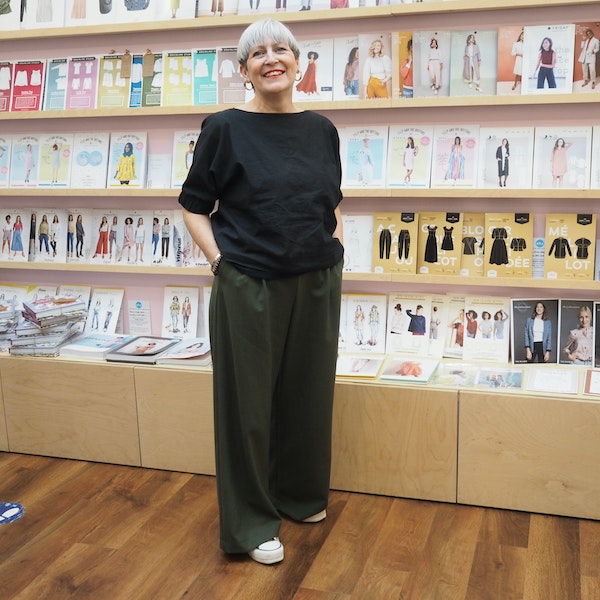 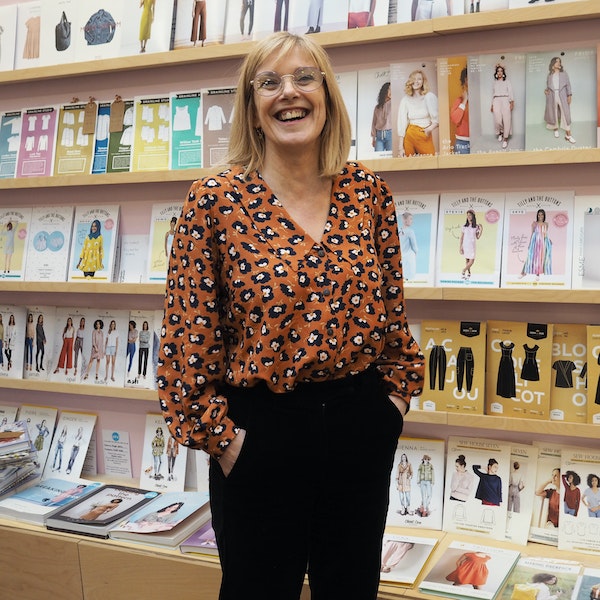 Lesley has made a beautiful version of the new Friday Pattern Company Patina blouse using some of our graphic flourish on ginger viscose fabric. It's such a perfect pattern and fabric combo as the fullness of the sleeves hangs so nicely.

She made a size small with no adjustments and find the fit quite roomy so will likely size down when making another version.

The pattern comes with two V depths and the version she made uses the higher V. She pointed out that the seam allowance is 1cm so be sure to keep that nice and accurate during construction! 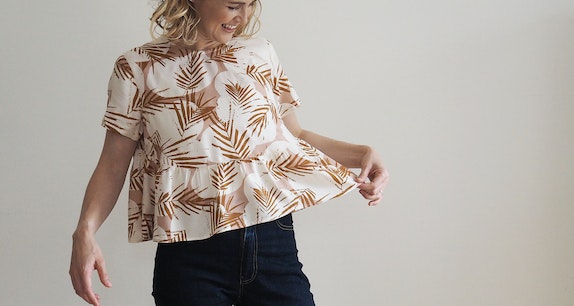 Check out what the team have been sewing this month! 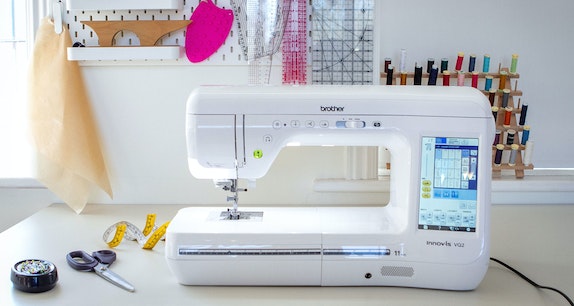