I’m super excited to share my latest make with you in todays post! I feel like I’ve been thinking, and probably talking, about making jeans forever and I’ve finally manage to tick it off my list!

Since the Closet Core Patterns Ginger jeans pattern came out back in 2014, I’ve heard nothing but good things about it and seen some pretty awesome versions on the web. It’s also one of the pattern choices in our two day jeans making workshop and the versions that come out of the class are amazing, so I know it’s a tried and tested pattern for a lot of people.

I can’t actually believe it’s taken me this long to make them. Given that I wear jeans pretty much everyday, and as most of my other clothes are handmade, it seems a shame not to have my own jeans too!

The Ginger jeans pattern comes with two variations. View A has a low rise and narrow stovepipe legs and View B is high-waisted with skinny legs and tummy slimming pocket stay.

For both versions you need a stretch denim with at least 2% lycra so that they can ‘hug you in all the right places’ as the pattern says – I love that!

For my version I used our classic blue 11oz stretch denim, which we also have in indigo (which is a darker deeper blue) and due back in stock really soon is the light blue colourway!

There are quite a lot of other bits and pieces you need when making jeans....top-stitching thread, jeans needles, rivets and jeans buttons. I used top stitching thread shade 968 for my jeans and the bronze hardware but we do have it in silver too.

Size wise I’m a 6 on the hips and an 8 on the waist but after speaking to Layla (that’s our jeans workshop tutor) she recommended going for the 6 as jeans always stretch out, always, so its best that they are super duper tight when you first make them.

Based on the fact that I’ve not got much bum/hipage going on and most of my RTW trousers and jeans are pretty baggy under the bum, I decided to try reducing the back crotch curve before I cut out my fabric (a flat seat adjustment). Following the advice and diagrams on the Closet Case Files blog (link here), I slashed it and overlapped the pattern by ½”.

Despite being concerned about the smaller waist size on the pattern, in the end I took them in at the waist. A wedge came out the centre back seam in the yoke section and I used a 2cm seam allowance at the side seams rather than the 1.5cm included in the pattern.

I would strongly suggest that you keep trying the jeans on as you make them - wear PJ’s as you sew, or something comfy that you can take on and off easily! Before you put the fly in, baste the jeans together with 5mm stitch length to check the fit, make any necessary adjustments and then take them all apart, before sewing them again for real.

Once I had put the waistband on I did another fit test and saw I was getting quite a big bubble effect in the yoke at the back.

So I lowered the waist by 1.5cm at the centre back and merged it back up to the side seams in an attempt to take out some of the excess.

It has helped for sure, but I still get a little bit of a bubble if I’ve been sitting down (probably just highlight my dodgy posture!), but I think for next time I’ll see if I can play around with it a bit more. It might be that the wedge I took out the centre back wasn't merged back into the seam enough - not 100% sure to be honest!

It looks flat when I'm standing or right after I've put the jeans on.

Then after I've been sitting down, crouching or bending over a lot this happens.

I also basted the pockets on before top stitching them and they were way to low for me so I raised them and bright them a bit closer to the centre back too.

I have to admit, I was feeling pretty apprehensive about making these jeans and kept thinking, can I do it? Will they come out rubbish? I’ve got such a limited about of time to sew, do I really want to spend time making something that won’t turn out right?

Well, I’ve been completely proved wrong because the pattern itself, the instructions that come with it, the extensive blog posts and sewalong posts on the Closest Case Files blog will literally walk you though every step and I promise you’ll be so surprised that you can do it!

Fly fronts kinda freak me out a bit. I think it’s quite hard to visualise the process as your doing it, but I just followed every step of the instructions very closely and I’m so chuffed with how it turned out.

The one thing my machine did struggle with a little was the bar tack. I think I managed to just get away with it at the fly but for the button loops, I decided to just use normal straight stitch and go over it a few times.

I had lots of fun on Pinterest looking pocket designs too and I’m pretty leased with how mine turned out. Not to plain but I didn’t want to go to OTT for my first try.

I think adding the rivets really finishes the jeans off and it was so easy to put them on with my prym vario pliers!

Check out how in this little video along with the top-stitching tips and see how the jeans look as I'm moving around wearing them.

UPDATE 1st June 2017 - The jeans packs that I mention in the video are now all sold out. We do still have all the individual items - check out the list above to see what you need or feel free to give the shop a call and we can process your order over the phone.

How they wash and wear

As I write this post, I’ve worn the jeans every day since I finished them and I’m on day 5 now. I’ve worn them with trainers and a linden while I crawled around at a mother and baby group. I’ve worn them with a smart pair of flats and a fancy blouse for a daytime party. I’ve worn them with sandals and a summer top when the sun was out on Monday. They are seriously so versatile and go with literally everything in my wardrobe (apart from my denim shirt maybe – I think I’m over double denim).

In terms of how they have worn in, they felt really tight at the start, I really had to give the zip a good pull to fasten them up, but they have relaxed out perfectly and are so comfy!

I’ve noticed that my left leg twists very slightly, but from reading one of the blog posts on the Closet Case files blog (link here) I think that might be due to the way denim is woven and the direction of the twill. It’s so subtle anyway, I don’t think anyone would notice unless I pointed it out.

If there is one think that I've learned while making these jeans, it is that my existing RTW jeans and trousers are a really, really terrible fit!

As I looked in the mirror at my new gingers and sighed at that tiny ripple in the back yoke, then put my old jeans back on to try and work out what went wrong, I caught a glimpse of the RTW ones and my eyes just about popped out. They were so baggy under the bum, the back pockets seemed really wide and I had lots of ripples under the waist band.

I think in general we are way more critical of our own handmade clothes than we ever are of the ones we buy from the shops and making these jeans has really brought this to light for me. Heather (the pattern designer) talks about this in a really interesting blog post - link here.

If you are feeling daunted about making jeans my advice to you would be to just give it a go! You are likely to end up with a garment that fits you much better than anything you could buy ready made - especially with a pattern as good as this one!

Hi, I'm Lauren and welcome to g&g! I love sewing so much I opened my own shop and creative studio so I can share my passion with others. 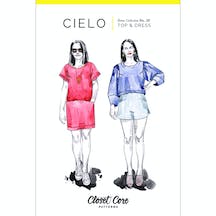 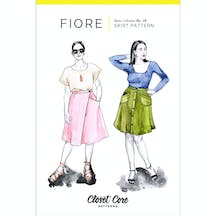 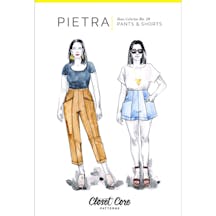