What a week last week was! You guys...the Sewing Bee Live show was awesome! I'm still recovering and we are still unpacking and getting ourselves sorted out in the shop after the show but I wanted to share a bit of a round up of the 4 days.

It was so super busy, I had 2-3 demos each day and also wanted to spend time on our g&g stand so I could chat to everyone as well. I wish I had taken more pictures!

I had the amazing Claire who was there for the whole show and set everything up with me too. Then Rosie helped on two days and Layla on another two days. The girls did such a brilliant job on the stand, I couldn't have done anything without them!

One of the main attractions at the event was a twice daily show in the Super Theatre hosted by Jenny Eclaire.

The show was based around a 45 minute alteration challenge where 3 ex-sewing bee's were paired with members of the audience and asked to transform an item of clothing.

I took part in that challenge on the Saturday morning with the lovely Amber. We were given a cotton shift dress and we transformed it into an off the shoulder ruffle top with a flower corsage and matching clutch bag! I was so chuffed...we only went and won!!

Patrick and Esme were also interviewed during the show and another ex-contestant from the series gave a little demo too.

When I took part in that section I was showing everyone how to use the Prym Vario pliers and the simflex gauge. We totally sold out by Sunday but are waiting for more to arrive!

It was so lovely to catch up with all the sewing bees and the judges too, some who I was just meeting for the first time...but I felt like I knew them already!

Jenni from series 2 was paired up with Sarah for the alteration challenge I took part in and they did an awesome job transforming their dress into a little outfit!

Each day I was also doing a demo on jersey neckbands at the Sewing Quarter Demo theatre.

It was lovely to meet Natasha who is a presenter on the Sewing Quarter channel. Also in this pic is Alex (I get mixed up with what series everyone was from!).

I did get a very brief chance to shop around on the Sunday morning and bought a beautiful hand woven hand dyed fabric from Fabrications.

And a chance to say hi to Melissa and Elizabeth (who was on loan to help Melissa for the show - she normally helps us out at the weekends in the shop!). They were promoting Melissas active wear book thats due to be released next year - can't wait for that!

Also at the show was a display of some of the garments we all made during the series. Here is my final show stopper sequin dress alongside Jades amazing beaded dress!

And I loved the Liberty exhibition as well. A beautiful collection of vintage Liberty dresses through the decades. I really wanted this blue one!

The good news is that the show will be back next year - this time in June! I think I need to catch up on a bit more sleep before I can think about it to much....but see you there?! 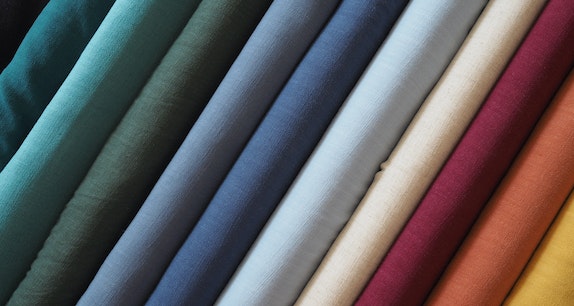 The Ultimate Guide to Linen Fabrics for Summer Sewing

Get sewing for summer with Laurens tips and inspiration! 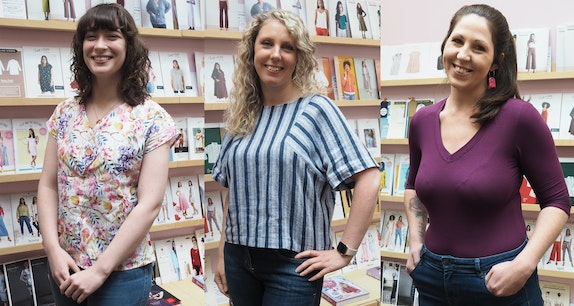